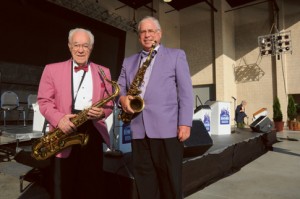 Legends
Johnny Knorr nears 50 years of making music
Written by Laura Kruse | | This email address is being protected from spambots. You need JavaScript enabled to view it.

It’s been almost 50 years since the Johnny Knorr Orchestra first took the stage to perform and, as far as Knorr is concerned, this Toledo-based musical group isn’t taking its last bow anytime soon.

“Music’s been my life,” Knorr said. “I love playing and hearing the music and, as long as I can hang in there, we’ll keep playing.”
Johnny and Jerry Knorr

Now, as he anticipates the half-century anniversary of his orchestra in 2010, the man who has helped keep big band music alive in Toledo is reflecting back on the past five decades of his career.


“There are a lot of memories that stand out,” Knorr said. “It’s hard to even think of picking out certain ones because there are just so many. If you compare my job to a factory job, it’s very different. With a factory job, you have the same routine all the time. But with mine, that’s not true. We constantly are seeing different people and playing in different venues, and it’s all added up to a great deal of satisfaction and happiness.”

Beyond bringing happiness to himself, the sounds of the Johnny Knorr Orchestra have touched many lives both around Toledo and throughout the country.

One man in particular is Michael Shaw, who met Knorr when Shaw was working in radio in the late 1980s. The two men bonded over their shared love of big band music. Shaw, who describes his friend as “one of America’s most accomplished big band leaders,” decided Knorr deserved recognition for his 50 years in the business. He came up with the idea to create a tribute for the Johnny Knorr Orchestra.

“I own a small interest in an independent record company called US20 Records,” Shaw said. “We’re going to do our share to help preserve some of the great music Johnny has given us through the years. It will be a collection of works performed by the Johnny Knorr Orchestra and will be released this fall.”

The tribute CD will be the second compilation of 2009 to feature the sounds of the group. The first, “Just the Way You Like It,” was released earlier this year. It is comprised of 22 of the orchestra’s greatest songs, all of which have been digitally remastered. Shaw said the talent of the Johnny Knorr Orchestra is evident simply in the way the new album was created.

“What really blows me away is the precision of the big bands like Johnny’s,” Shaw said. “Most of the 22 tracks on the new album were done in one take. That’s like sinking a 300-foot putt in a sudden death playoff with Tiger Woods at the U.S. Open.”

Shaw said “Just the Way You Like It” seemed to be an easy decision for the new album’s title, as it plays off of the orchestra’s tagline. “The music you like … the way you like to hear it,” came from Johnny Desmond, a vocalist with Glenn Miller, who once told Knorr, “You play tenor sax like I like to hear it!”

Beyond receiving praise from Desmond, Knorr said that throughout the past 50 years, he’s been fortunate to rub shoulders with an assortment of musical legends, including Lawrence Welk, Bobby Vinton and Helen O’Connell.

When asked what memory stands out the most, Knorr settled on a night in the late 1980s when Bob Hope made his way to Toledo.

“He came in and did a show at the Stranahan,” Knorr said. “At that time, I had a 32-piece orchestra, and we played for him. Of course, he was the main attraction, but we backed him up. That was special.”

Although the orchestra is smaller today, the band members who play with Knorr have been with him an average of 20 years.

Among those members are vocalist Gay Hobbs; Bob Johnson on the drums; Howard Hill on the piano; Mark Felder on the saxophone, clarinet and flute; John Dana on the bass; Stan Grady on the trumpet; Mike Miller on the trombone; Dave Tippett on the trumpet; Tim Vesey on woodwinds, and Knorr’s son Jerry, who plays five saxophones and the clarinet, in addition to serving as the band’s assistant director.

Lifeline for the band

An integral part of the Johnny Knorr Orchestra, Jerry Knorr is referred to by his father as the band’s “lifeline.”

“Without him, I wouldn’t be able to perform with the band,” the elder Knorr said. “Not only is he the assistant director, he also makes sure everything behind the scenes is taken care of.”

Knorr calls his wife Jane another lifeline. Jane has been supportive of her husband’s musical ambitions since the beginning, when she did her part to help create the band’s signature dapper look.

“In 1960, she made red vests for everybody in the band,” Knorr said. “It’s things like that that helped to keep things running all these years. When I needed something, [Jerry and Jane] were always there to provide.”

Knorr calls Toledo home and Sylvania’s Centennial Terrace the band’s “home base,” but the orchestra still travels. It recently played for the largest crowd ever to fill St. Mary’s Park, an outdoor venue in Monroe, Michigan, Knorr said.

“There were probably as many as 1,500 people there,” Knorr said, adding that he received a standing ovation for his solo rendition of “Stranger on the Shore.” “When I play my solos, that’s what they like,” he said.

Among other notable performances were the orchestra’s trips to Washington D.C., the Grand Hotel on Mackinac Island and Frankenmuth, Mich., where they played with the band from the “Lawrence Welk Show.”

Knorr said his father enticed him to pick up his first instrument, the violin, at “the ripe old age of 9.”

“My dad had a lot to do with my getting into music,” he said.

It was up until his time at Libbey High School that the younger Knorr played the violin, until he discovered there was no place for the string instrument in the marching band. Enter the saxophone, which is what he picked up his freshman year.

While Knorr said he didn’t think he’d still be performing a half century after his band first took the stage in 1960, he said he can’t fathom his exit from the music scene.